Citation of The Founder/President Of Solace Place Foundation International 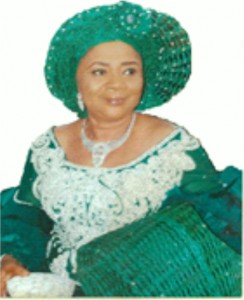 Pastor Amb. Mrs. Gani Mercy Ajuka is a multi-talented resource person and a humanist who acts under the inspiration of the Holy Spirit. She is a humble and committed servant of God whose activities have positively impacted on the lives of many orphans, widows and jobless youths. Through her body, “Solace Place Foundation International”, a non-governmental and charity organization.

She brought succor and restored the lost hope of thousands of poor persecuted, frustrated and handicapped people, irrespective of ethnicity, race, colour, creed or religion.

Specifically, her benevolence has blessed the lives of other evangelist; enabled some poor male and female youths to acquire lucrative skills for self-reliance; empowered poor rural widows to start up petty-trading; saved the lives of accident victims, as well as guaranteed the career and a better future for several indigent students. Through this body, she has also led a large number of people to Christ by saving the lives of nursing mothers and sick people abandoned at various hospitals.

Born to the family of Mr. and Mrs. Ikechukwu Nwaeke Opurum of Egbulubi Ndashi community in Etche LGA of Rivers State. Born on 20th April, 1967, Ambassador Mrs. Gani Mercy Ajuka obtained her primary school education at State School Ndashi where she obtained her First School Leaving Certificate (FSLC) from1973 to 1978. She obtained her West African Examination Certificate (WAEC) from Government Secondary School, Ndashi from 1979 to 1984. She later attended a Fashion and Catering Institution from Rexmoore Catering and Fashion Design Institute from 1998 to 2001. She proceeded to the National Open University of Nigeria (NOUN) in 2010 to 2014 where she got her Bachelor of Science (BSc) in Peace Study and Conflict Resolution. Recently, due to quest to serve God, she further attended Pentecostal Theological Seminary where she obtained National Diploma in Theological Studies from 2016 to 2019.

With a heart created for charity and endowed to achieve greatness. Mrs. Gani in 2001 founded and became the director of Batam Global Services Nig. Ltd, a business outfit that specialized in construction jobs, and supplies materials to other companies with assorted products and gadgets for both corporate bodies and individuals.

She is Married to Engr. Gani Stephen Neenaebari, from Buan in Khana LGA, the marriage is blessed with four lovely children.

In 2006, she founded and became the president of Solace Place Foundation International, a non-governmental organization that gives comfort and relief to widows, orphans and the destitute in the Niger Delta Area of Nigeria. Her humanitarian services have attracted both local and international attention for the consistent and outstanding manner and depth of sacrifice by her NGO. Through her NGO, Mrs. Gani Mercy Ajuka has reformed lives, trained and re-oriented indigent youths and transformed the lives of many others to become self-reliant and being useful members of their families in particular, and the society at large.

As part of numerous achievements and contributions to the society, she was appointed co-ordinator of Ethnics and Value in Rivers State.

She has bagged many awards for her humanitarian strives and contributions, among which includes: An Ambassador of Peace award and appointment as Peace Advocate from United Nations Bureau of Inter-Religious International Federation for Peace and the Universal Peace Federation.

In all these great achievements, may all glory be unto our Lord Jesus “Amen”.

This Sliding Bar can be switched on or off in theme options, and can take any widget you throw at it or even fill it with your custom HTML Code. Its perfect for grabbing the attention of your viewers. Choose between 1, 2, 3 or 4 columns, set the background color, widget divider color, activate transparency, a top border or fully disable it on desktop and mobile.

Sign-up to get the latest news and update information. Don't worry, we won't send spam!